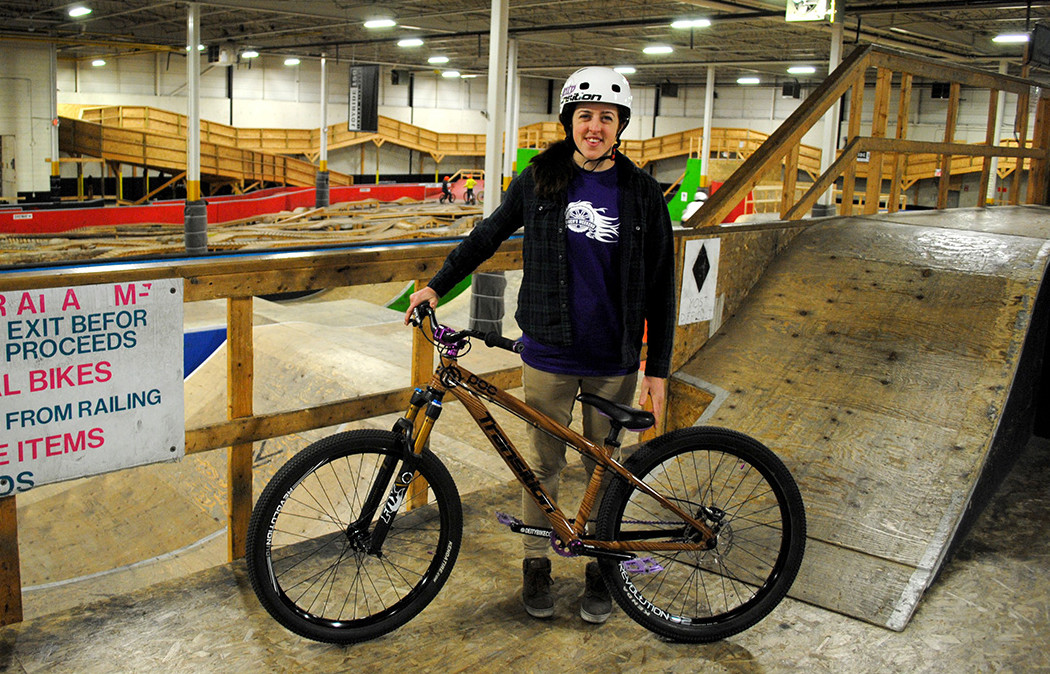 How one millennial is facing fears, travelling the world and taking big jumps for women in her sport.

When I walked in the door at Joyride 150 Bike Park in Markham, Ontario on the first of February, I was not the only one feeling relieved to get out of the cold. The giant, renovated factory full of ramps, jumps and trails is a Canadian rider’s dream. The only park of its kind in the country, Joyride offers a sweet escape for bikers during the grueling winter months.

This weekend, though, is special. It’s Joyride’s fourth annual Women’s Weekend, and the park is full of female riders of all ages – from four to 64. One woman in particular stands out in the crowd. She sports a bright purple Joyride Women’s Weekend t-shirt overtop a flannel button up. Her dark brown hair is swept back in a casual ponytail. Instead of makeup she’s wearing a big, bright smile. 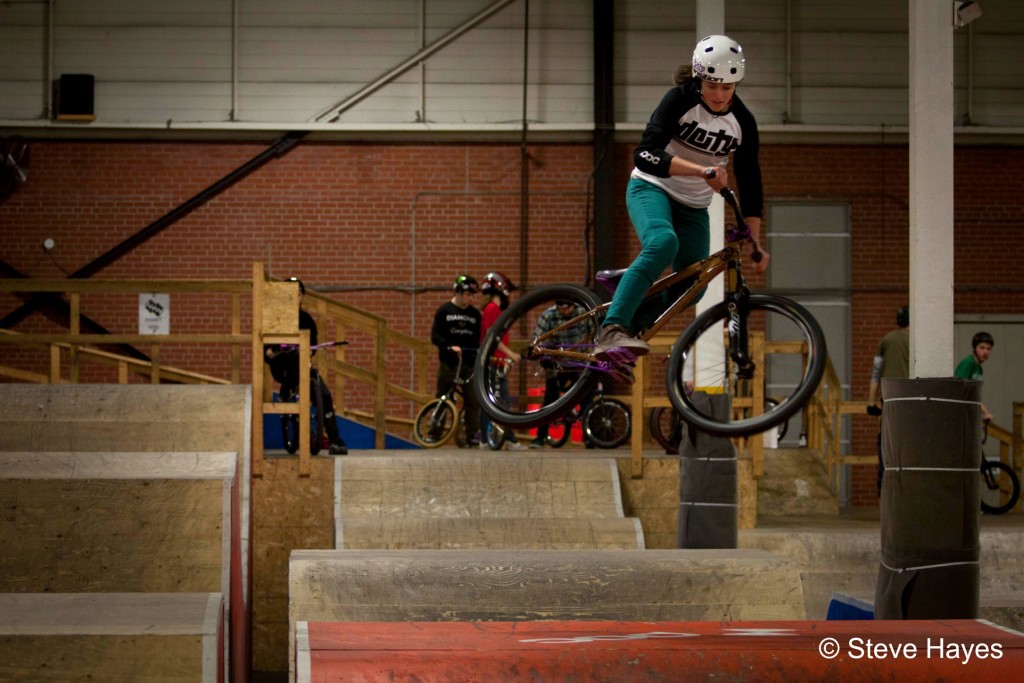 It’s an exciting day for 25-year-old Trish Bromley. Her enthusiasm is tangible. She’s quick on her feet, running from “The Lounge,” where people can sit to eat lunch, back to the front counter to sell a bottle of Gatorade to a young woman, and then over to the P.A system to make an announcement in her cheery voice that bounces off the walls. She hasn’t even been on her bike yet – her preferred method of transportation – but you can tell she feels at home here.

I learn from Joyride’s owner, Mark Summers, that Trish sometimes sleeps in a small bedroom in the back of the park. I imagine the creepy noises one must hear being all alone in this huge building at night. But Trish lives downtown Toronto, and this lets her avoid the long commute to and from work. It seems fitting a woman like Trish would truly live at the bike park – that is until I find out she’s actually afraid of the dark.

How it All Began

Trish tells me she is still fairly new to the sport of freeride - a discipline of mountain biking focused on tricks, style and technical trail features. She started six years ago, after taking a year off from her Sports Management program at Durham College in Oshawa, Ontario to teach skiing in Whistler, B.C. It was 2009, and Trish wanted to put herself in the heat of the action for the upcoming Olympics. But she arrived in the spring, the wrong season for skiing, so she ended up learning how to ride.

I didn’t know a soul, but I fell in love with the town immediately.

Trish has always had an admiration for athletics – something her father instilled upon her at a young age. Growing up, Trish spent every day in the barn. “Horses were my best friend,” she tells me. “I was a total barn girl.” 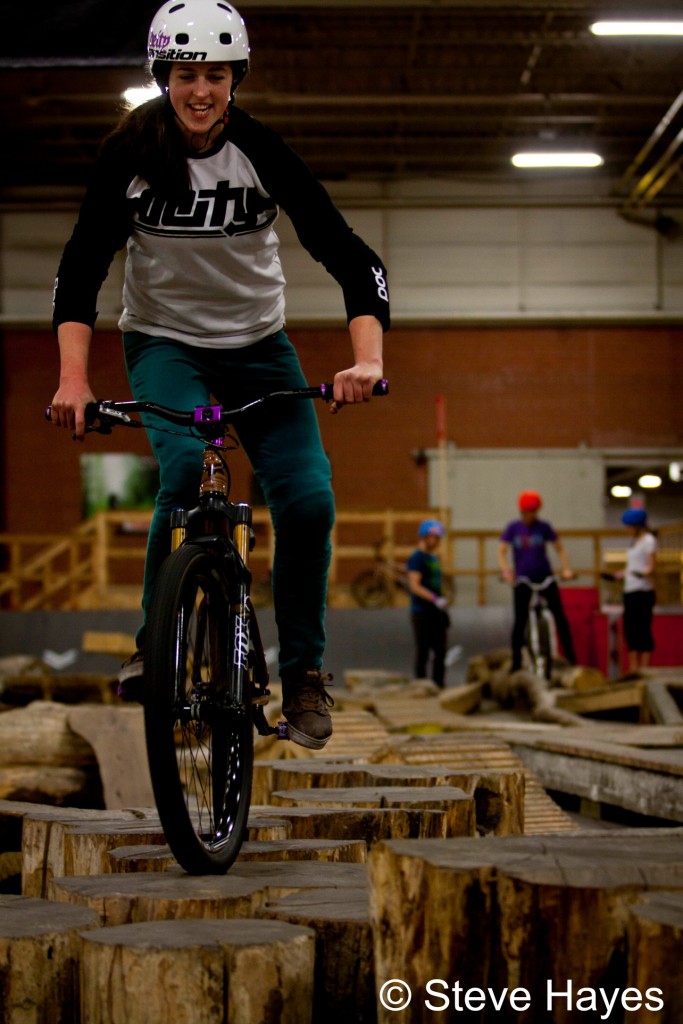 She started skiing in high school, and became passionate about helping other athletes pursue sports. This led her to the Sports Management program at Durham College, where she took a course studying the history of the Olympics, and after her first year of college she headed out to Whistler to see it all in person.

“I didn’t have a job, didn’t have a place to stay,” she says about making the move. “I literally got off the bus and went to the library to start calling landlords. I didn’t know a soul, but I fell in love with the town immediately.”

Trish returns to Whistler every summer, where she splits her time between working, volunteering, coaching and competing, most often through a riding event company called Crankworx. “I find that working the events make them less scary to compete in, because all of a sudden you see the background and the skeleton of it, and it makes the big show a lot less intimidating,” she says.

This year, Crankworx is making a stop in New Zealand, and Trish, eager to take advantage of the opportunity, has booked her ticket. She’s been fortunate to do a lot of travelling through the sport, including visits to California, Utah and New Hampshire last fall. By working and coaching on the side, she’s able to balance out the cost of travel while also riding and competing. Though she doesn’t always break even, she’s constantly searching for creative ways to supplement her income.

“There’s this one line: ‘If you really want to do something, you’ll find a way; if you don’t, you’ll find an excuse.’ And budget is definitely one of those things that is a really easy excuse,” she says.

It’s a really freeing feeling to ride because you have to just let go, and you have to let the bike move and dance underneath you.

There’s no way millennial financial woes are stopping Trish from reaching her goals. After all, this is a woman who can do a backflip on her bike. You’d think she’d be more concerned with injury, but after a crash two summers ago led to getting surgery on both of her elbows, Trish views injury as just another part of the sport.

“[After the crash] I thought, OK, I can be scared of injuries or I can get stronger from it and move forward,” she says.

Obviously, she chooses the latter.

[The video above shows Trish doing a backflip at Joyride 150 one year ago].

“It’s a really freeing feeling to ride because you have to just let go, and you have to let the bike move and dance underneath you,” she says.

Trish has learned to turn her fears into excitement, something that has come in handy countless times, like when she first learned to backflip, and when she was recently riding along a world-renowned route in California. “I was riding these jumps and a little 12-year-old boy said, ‘I don’t think a girl has ever ridden these jumps before.’ And I was terrified going into the jumps. These were bigger than I’d ever hit before.”

It’s just that relationship with fear – you have to change it to excitement and then it becomes a lot more fun.

In biking, it helps for female riders to learn from other women, because they learn differently than men, Trish says. When she was starting out, she’d ride with women who she could “follow in,” to see how they worked through the course. But this time she was the only girl.

“I was completely terrified, and buzzing off of the fact the guys were completely stoked that I was hitting these jumps and no girl has hit them before,” she says.

She ended up over-rotating and crashing on the flip. But she got up and tried it again, landing it the second time. Trish says these adventures are what keep her so captivated by the sport. Like money, fear is not going to get in the way of doing what she loves. 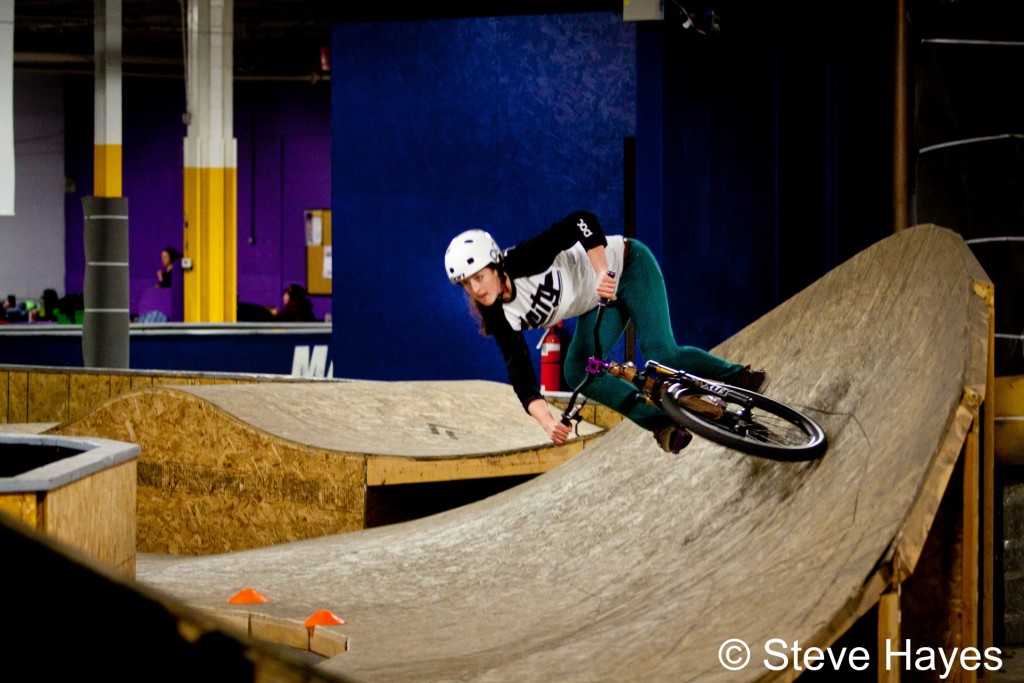 “People say, ‘oh you’re so brave,’ and I am the biggest scaredy-cat I know,” she says. “I’m terrified of everything – afraid of the dark, afraid of zombies around the corner. And it’s just that relationship with fear – you have to change it to excitement and then it becomes a lot more fun.”

I want to see more girls in the sport… And then I want to compete, and I want to win.

Trish is working to share her love of biking with other women to help build up female representation in the sport. She notes that Women’s Weekend at Joyride is a great opportunity for females to come out and get inspired by the energy around them. “I would love to be able to show women how great of an opportunity cycling is to travel, to explore, to meet new people, to have great adventures, to just have a lot of fun at life,” she says. 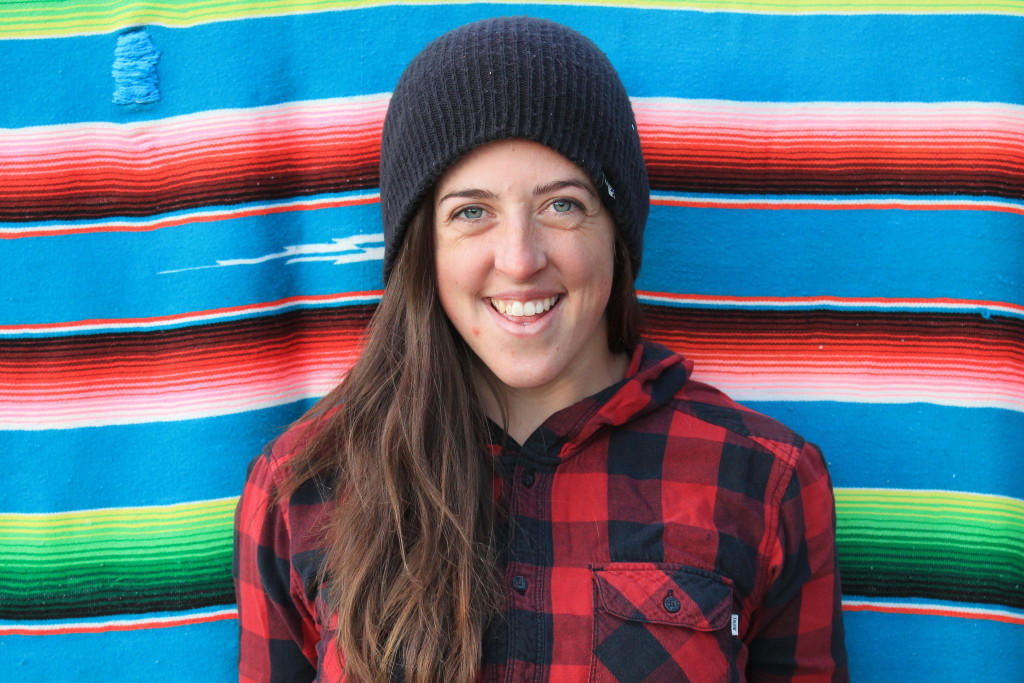 Riding has had a huge influence on Trish’s life, and she wants others to experience this. “I’m learning a lot about my own life through the sport, and through the adventures, and through the people I’m meeting,” she says. “I really like surprising myself, challenging myself, scaring myself, and just kind of figuring it all out.”

Right now, many of the events Trish works do not allow female athletes to compete. She wants this to change. “I want to see more girls in the sport, both at the competitive level and the participation level,” she says. “And then I want to compete, and I want to win.”

Something tells me Trish will find a way to do exactly that.